The development of the war in Ukraine leaves no room for optimism for the European economy. It is clear that the longer the war lasts, the greater its economic impact. At the moment we have the terrible accuracy that comes from inflation, which in turn is due in large part to the energy crisis intensifying by the war.

Accuracy concerns everything. From the cost of electricity for businesses and households to the cost of basic food and rent and of course all products and services without exception.

In any case, accuracy creates a great financial burden on everyone, burdens public finances, restricts growth, possibly if the situation continues to cause recession and stagnant inflation, and ultimately all this translates into high political costs for the government. This will sooner or later cause political instability and social unrest and the economy will suffer even more.

All this is already happening, without Russia having cut off Europe’s gas supply. But depending on how the situation develops, fears of a halt to Russian gas exports to Europe remain. In this case, on the one hand, the costs will skyrocket due to shortages, and on the other hand, we may have dramatic developments for industries across Europe, ie they may be forced to shut down.

This, of course, means a cessation of production and mass redundancies with tragic consequences for European societies and a complete reversal of all economic prospects. It will certainly mean the collapse of all stock markets and will be the biggest crisis the European economy has ever suffered.

Europe’s dependence on Russian gas is so great that imports from the US or other countries cannot directly replace Russian gas if supplies are cut off.

We should point out that even if we assume that the US could supply us sufficiently with liquefied natural gas (LNG) ships, the problem is that it needs gasification units to use it. Such units do not exist in all European countries and where they exist they are not enough. For example, Germany has no gasification unit, Greece has only one. Therefore, the receipt of liquefied natural gas from the USA does not solve the problem, as it can not be gasified easily and quickly to be used by European industry.

So the problem is from big to huge for the whole of Europe. The only solution is to end the war, but that does not depend on Europe. It depends on the negotiations between Russia and Ukraine, which are not going well. Can Europe push for a solution? Very hard. Europe has not, at first, developed a common line on dealing with the energy crisis. Every country does what it thinks and what it can.

If Europe had agreed to issue Eurobonds to cover the excessive costs of the crisis, then it could have hoped for something better. However, he does not agree and the reason is that, as usual, Germany resists any thought of a Eurobond. Currently. Because if the gas supply from Russia is cut off, Germany will suffer the biggest losses as the strongest industrialized country.

The second problem is that in the issue of this war, Europe is not negotiating separately from the United States. It necessarily follows the calls of NATO. And the interests of NATO and Europe are not always the same everywhere. NATO is a military alliance, the EU economic alliance. And the biggest problem is that while only Europe suffers from the effects of the energy crisis and would like a quick solution to the problem, the US, Britain, Australia and the other NATO countries co-deciding on the NATO strategy are not affected. from gas shortages.

Therefore, European economic interests are not identical with the “Anglo-Saxon” in the energy sector, they may be the opposite. Unfortunately, the possibilities for Europe to intervene as a political and economic power in the Russia-Ukraine war are minimal or non-existent at the moment. 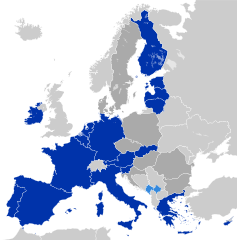 The Sustainable Solution for the Eurozone Economy-Part III

Fixed-Income Markets for the rest of 2021