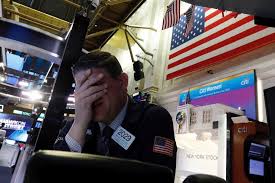 The EU last week announced that the enforced rules on budgetary discipline are being suspended in order the member-countries of Eurozone to deal drastically with the upcoming recession due to the Covid-19 (Coronavirus) pandemic. The US Senate House on March 25 approved the $2trillion fiscal package proposal of US President Donald Trump to supprot the US economy against the recession which caused from the coronavirus.

Both the governments of the developed countries and their respective central banks are constantly rushing to upgrade with new measures the support of their economies and, more generally, the global economy which gradually all together and each separately economies enter a recession coma. The upcoming economic crisis caused by the Coronavirus pandemic is the most difficult of all forms of recession because it is hitting both demand and supply side at the same time.

©The law of intellectual property is prohibited in any way unlawful use/appropriation of this article, with heavy civil and criminal penalties for the infringer.

The ECB and its monetary policy to date have been exhausted in creating artificial growth in the euro area and since before the crisis it kept its base borrowing rate at near zero levels it does not allow room for maneuvers for to support the effort to contain the fall in Eurozone GDP.

On Thursday, March 12th the ECB announced a €120bn capital relief for European systemic banks to cover their losses from a future increase in the proportion of non-performing loans by households and businesses respectively.

On Thursday, 19 March the ECB, and after much pressure from severely affected member countries such as Italy,  announced the implementation of a new €720bn quantitative easing program.

At the same time, the Commission, through its President Ursula von der Leyen, announced on Friday 20 March the suspension of the EU’s fiscal discipline rules. An unprecedented measure that will allow EU member countries to use the funds needed to deal with the consequences of the induced recession.

In fact, with this decision, the Commission suspends the Stability and Growth Pact which binds all euro area member countries. The aim is to increase public spending and to have tax-exemptions at the level of 1% of the Eurozone GDP, in order to strengthen the economies affected by the Covid-19 crisis.

However, restrictions referred to in the Maastricht Treaty such as that member countries are obliged to maintain an annual budget deficit of < 3% of their GDP remain.

The Italian government announced measures of €25bn to help borrowers and at the same time published measures suspending payments of certain mortgage and bank loan deadlines.

The French government has announced measures of €45bn. These measures aim to reduce or cancel debts only for the month of March. Small businesses in difficulty will benefit from the suspension of payment of their bill for social goods such as water, gas, electricity and their headquarters rents.

At the same time, the French state announced the granting of €300bn in guarantees on loans granted by banks to companies affected by the Coronavirus crisis while also acquiring shares of the most important companies.

The German government has announced the largest private and public sector financial support plan, with guarantees and credits of €550bn.

Spain’s government has announced it will guarantee €100bn of business loans.

President Donald Trump’s proposal and the Republican party are pushing for a senate debate on a package of support for the U.S. economy approaching $2trillion. Democrats have reservations about this plan. If the Democrats agree then this draft proposal will be pushed forward for a resolution in the House of Representatives. H

At the same time, a $100bn welfare program has already been approved by Congress. Uncertainty among workers and small-medium-sized enterprises is high as entire sectors of the economy such as catering, tourism and air suspension have already been closed.

For its part, the FED has offered to support loans relating to real estate and consumer goods such as cars and to provide loans mainly to affected lockdown companies. Essentially, the FED is implementing a short-term debt financing strategy to support households and businesses for the first few months of lockdown on the economy.

On Sunday, March 15, the FED moved to cut its key basic borrowing rate to zero, while clarifying that it would maintain these interest rates for the duration of the pandemic crisis.

UK and Bank of England (ΒοΕ)

Britain’s government has announced the granting of state guarantees for business loans of up to £330bn and financial assistance of £20bn.

At the same time, the British Government promised to grant subsidies to cover up to 80% of the salaries of workers who have been forced temporary leave after the closure of businesses operating in the catering and food industry.

Canada and Bank of Canada (BoC)

The Federal Government of Canada announced a fiscal support package initially $10bn CAD  and then announced a second largest support package that includes a $27bn CAD to directly support the income of workers in precarious situations and which are the companies present a problem while $55bn CAD will be granted in the form of a suspended tax debts.

People’s Bank of China (PBOC) in turn announced extensions and business loan renewals at the end of February. At the same time, it released 550bn Yuan (€70,6bn) from its foreign exchange reserves to support the Chinese economy.

The Hong Kong government has decided to give money directly to its citizens.

Japan and Bank of Japan (BoJ)

The BoJ used ETF buying shares and syndicated bonds through this fund; these purchases reached the levels of ¥12trillion ($113bn).

The Central Bank of Korea in turn announced a reduction in its base borrowing rate to 0,75%.

The Reserve Bank of Australia cut its key lending rate to 0,25 per cent and announced the debt redemption of small and medium-sized enterprises through commercial banks operating in Australia.

All these economic policies and generous fiscal liquidity packages cannot make a substantial economic difference because they are only looking to generously strengthen the demand side, while both demand and supply in the economies are being hit hard at the same time.

Therefore, the economic crisis caused by the Covid-19 (Coronavirus) pandemic is much worse than the global financial crisis of 2008. On how to avoid conflict between the world’s developed economies and the upcoming economic Armageddon, please read the analysis entitled “How the US and the World’s Countries will avoid the Economic Armageddon caused by the Lockdown of Coronavirus Pandemic“

How the Product of Tourism That Respects the Environment Develops Creatively

The low interest rates, their consequences & the returns of assets as an investment selection criterion